To hear John Estok tell it, student athletes at the high school level are already Ferraris on the showroom floor. As Penn Charter’s full-time strength and conditioning coach, that makes his task easy.

“We’re just putting spinners on them,” he said.

Estok came on board full-time in January 2013 when Penn Charter decided to invest in a strength and conditioning program. He quickly led the program to such popularity that it outgrew its old space in Dooney Field House. Even before the move and the influx of new equipment, Estok’s results have been outstanding—just ask the coaches, administrators and any of the Upper School’s athletes.

“Coach Estok has provided a culture change,” Jelani Buie, a senior football player, said. “He’s opened a lot of eyes. The changes I’ve made since freshman year are huge, and they coincide with him being here. I think I can speak for everybody when I say he’s made us believe we can conquer any task.”

“John’s brought so much energy,” echoed head football coach Tom Coyle. “And it’s not just about winning a few more games; John has offered them life lessons to prepare the kids for their time beyond Penn Charter. It’s a neat thing, and it works hand-in-hand with what this school is all about.”

Or, as Director of Athletics and Athletic Planning John Thiel succinctly put it, “We thought there would be a connection with the kids when we hired him. We got it.”

But the high school level is where his true passion lies.

“Coming here was a no-brainer,” Estok said. “With a sport requirement, every kid—each boy and girl—is exposed to athletics in some capacity. This is where my passion is. I’m here to be that extra voice for the kids who need it, to provide structure and guidance at the crucial ages of 13 to 18.”

A common misconception Estok is helping to disprove through PC’s new strength and conditioning program is that physical fitness is all about weight training. Lifting weights is just a small component of the total program, which also includes movement, flexibility, cardiovascular, nutrition and wellness. Being able to squat 500 pounds isn’t for everyone, and it shouldn’t be any student’s singular focus. “We need to expose them to other things,” Estok said. “Not into lifting weights? You can try aerobics, yoga, modified CrossFit, Zumba or kickboxing. In here, you’re only limited by your own imagination.”

Estok and PC Athletics have worked to provide individualized attention to athletes while simultaneously building a team-first atmosphere. Estok works with most of PC’s varsity programs as a team, and also assists individual players in establishing specific goals. The center opens for faculty at 6:00 a.m.; Estok usually works with a team in the morning between 6:45 to 7:45 a.m. and after school from 2:30 to 6:00 p.m.; Upper School physical education classes use the facility during school hours. Even if Estok is working with a team at the time, individual students pop in to use the room. The Fitness Center is open year-round, Monday–Saturday, save for winter break and a two-week “dead period” in August. Going forward, Estok said interest in the initiative has been so strong that he’s considering opening up the room as early as 6:30 a.m. 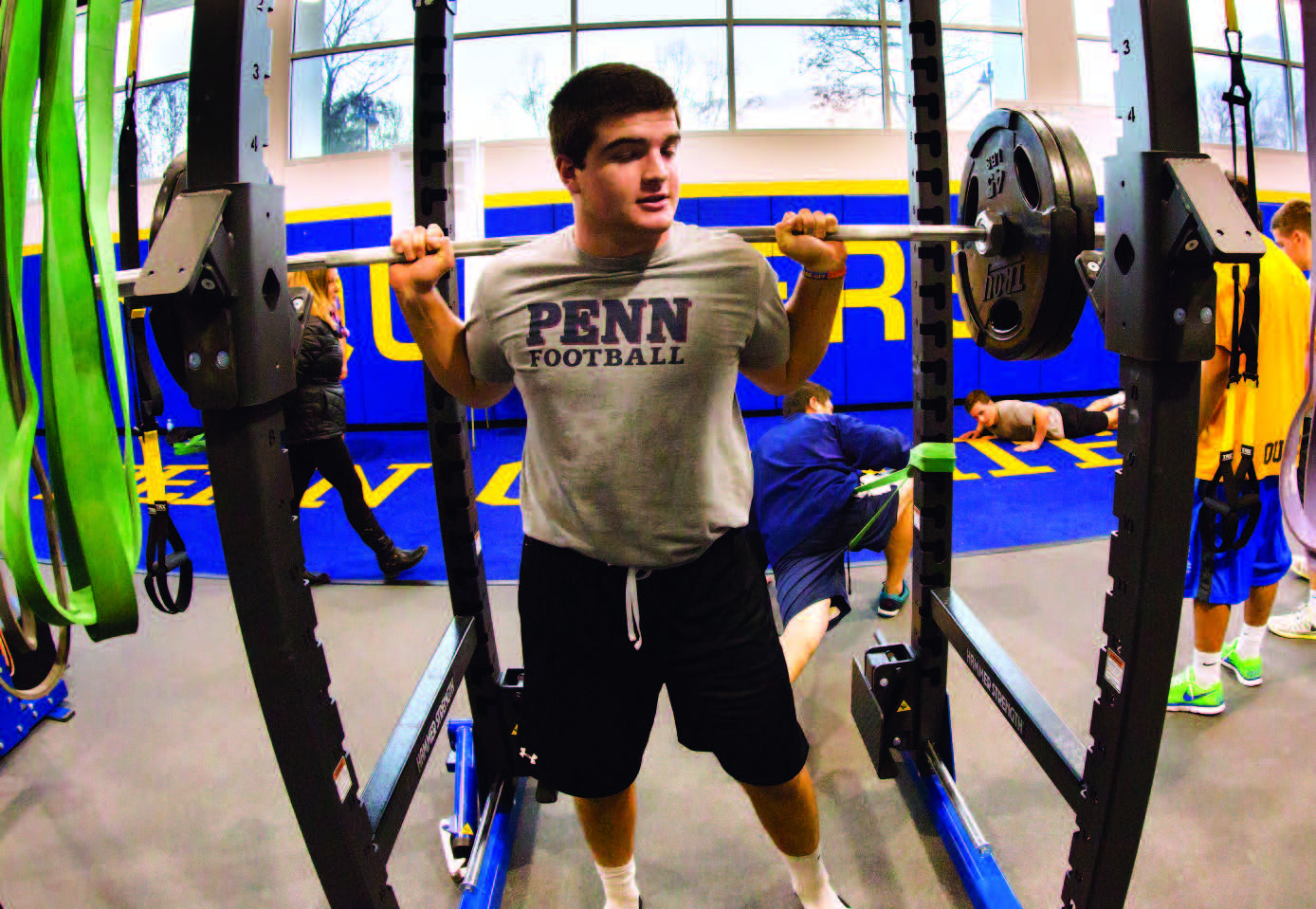 Thiel is interested in getting individual students and even Middle School students involved in fitness, which he recognizes as a permanent life skill. “It’s not just for the jocks or the boys … it’s for everyone,” Thiel said. “It’s about emerging a healthier, stronger individual. John takes boys and girls and develops them into young men and women who are ready to go out and strive.”

At the outset, Estok would be working with four to six kids at a time; now, it is common for 100 students to be training at one time, one of the main reasons the Fitness Center reopened in The Pit, a bigger space under the Graham Center basketball court that was previously used by the wrestling program. PC wrestling moved “back home” to its original, albeit refurbished, space in the Old Gym.

Estok pays attention not only to the equipment but the environment: it should be positive and inclusive. The weight room used to be a space dominated by football players; now, it features male and female athletes from all sports, showcasing that any divide between the sexes has been bridged.

“When we were in there, John was just equally as invested in us as the boys,” Leigh Steinberg OPC ’14, a three-sport standout, said. “I really appreciated that. He didn’t treat us lesser because we were girls. He made us feel like legitimate athletes, not throwaways. He focuses his efforts on all teams.”

More importantly, the success of the program is showing how imperative strength and conditioning is for high school student-athletes.

“Having access to a well-trained expert with a good foundation in the science of athletic performance and nutrition can be helpful in guiding adolescents toward making good choices,” said Michele LaBotz, a sports medicine physician at InterMed in Portland, Maine. “Establishing physical literacy is a component not only for optimal sports performance, but also a means for minimizing sports injury risk and establishing a pattern of healthy physical activity that can serve as foundation for lifestyle choices into adulthood. The right person in the right place can make all the difference.” 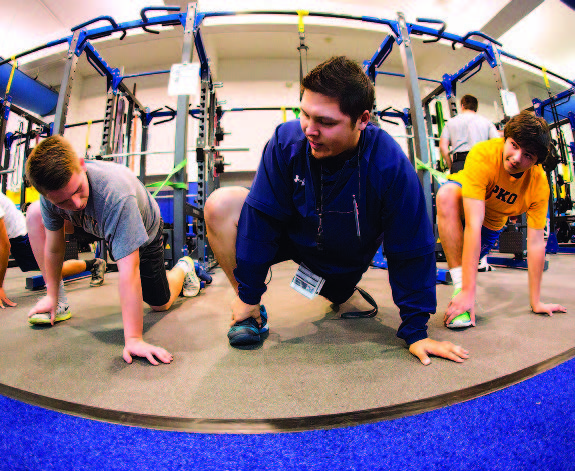 And if students want to play a sport at the next level, they would be wise to listen to Estok’s tutelage.

“Having a strength coach at the high school level makes my job easier,” said Drew Wilson, director of strength and conditioning at the University of Maryland, whom Estok studied under and called his mentor. “What John is doing is teaching kids about their bodies as they change, a crucial time in mastering development in areas such as lifting, running, mobility, nutrition and recovery.”

“Once you learn the correct way to elevate your game, you carry it with you the rest of your life,” said Darci Borski, PC associate athletic director and head coach of girls soccer. “It’s about giving them tools to succeed both now and when they leave PC. The sky’s the limit.”

At Penn Charter, excellence is preached across the board, from athletics to academics to the arts. The reborn fitness program serves as the foundation of a healthier, happier lifestyle, and it’s available to anyone who walks through the door.

“I want to make sure everyone has an opportunity to get in here,” Estok said. “We want this program to be the best—not the best in high school or college athletics, just the best. If the students here want to commit themselves to something, they have to put their minds to it. It’s not any different than being in class or a club … same expectations, same responsibility.

“I want them to leave here with great memories and a great foundation of pride, work ethic and camaraderie.

“It can make you more successful as a student, in the work force and just overall as a person. That’s what we want them taking from this. It’s not about making someone better athletically … it’s to make them better, period. If you can do it in this setting, you can do it anywhere.”