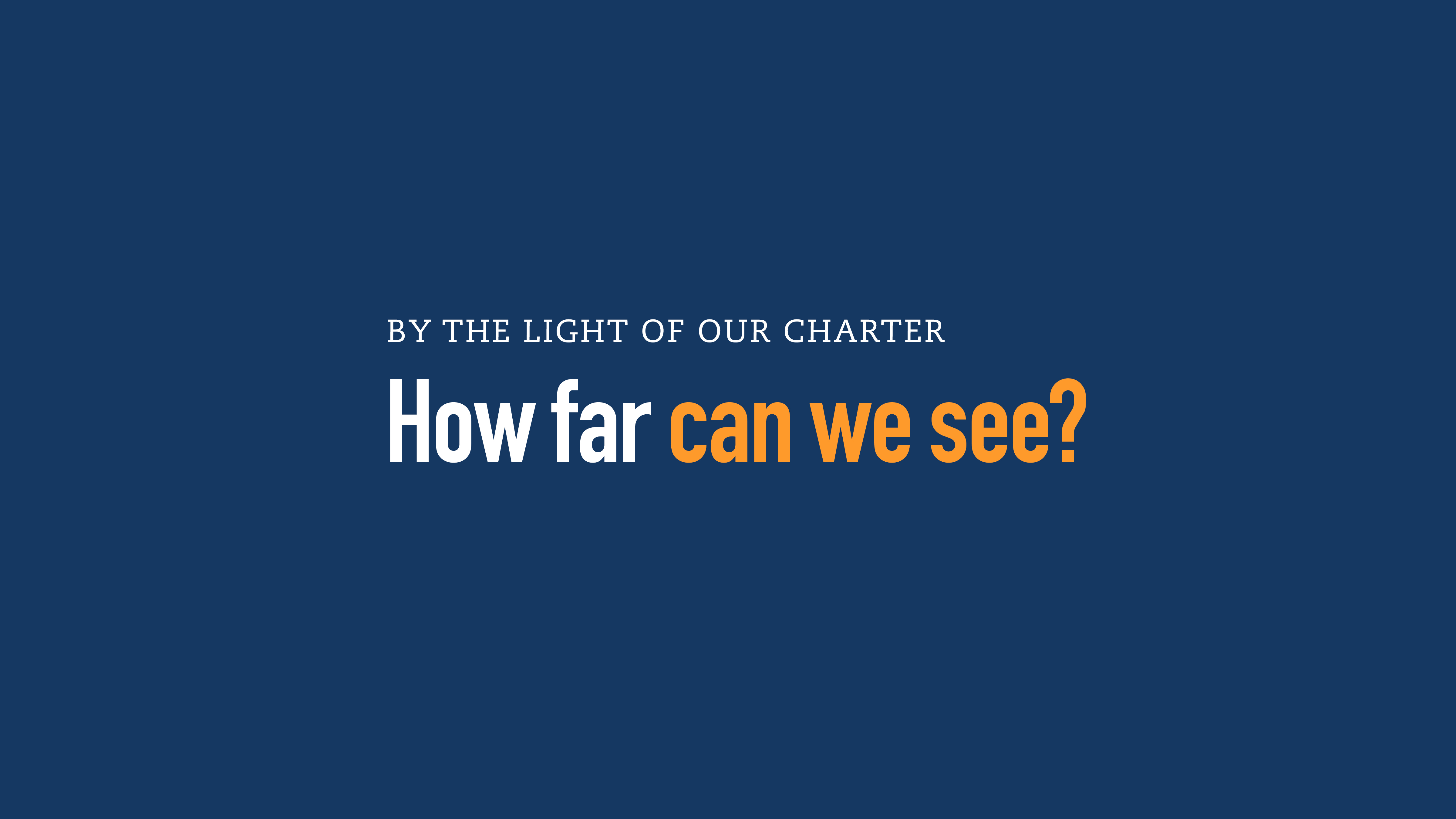 William Penn ignited the spark of Penn Charter and our school’s enduring purpose.

More than 328 years later, that light has expanded and radiated, revealing the path forward.

Now, we face a new milestone for our students–and their world.

We can continue to improve incrementally. That would be the mark of a fine school.

Or, we can ask ourselves: What if we committed to being not only a fine school, but a visionary school?

What if we refuse to limit ourselves and instead follow our bravest imaginations to the best future for children?

After four years of quiet conversation with the school’s closest friends, Head of School Darryl J. Ford gathered a crowd on October 20 for a momentous public announcement: Over the next three years, the school will engage in a $75 million campaign to fund a vision for the future of Penn Charter.

By the Light of Our Charter, How Far Can We See? is a comprehensive capital campaign to support key initiatives which, Ford said, will position Penn Charter for the next 10, 20 and 50 years, and beyond.

“We are at an inflection point in time,” Ford told a crowd of 515 OPCs, parents, faculty and friends gathered in Dooney Field House.

“We have been reinventing a classic education, and now we will join together in a capital campaign to secure the future of our school and transform this 47-acre campus.”

The crowd gave an audible gasp when Ford announced the $75 million goal, and an even louder gasp when he revealed that, during four years of a quiet, leadership phase of the campaign, the school already raised $50.1 million toward the goal. The total raised climbed to $53.1 million by press time.

Teachers at the Center

The public phase of the campaign is designed to last three years and the impact will be most evident to visitors in the construction they will observe on Penn Charter’s campus. However, Ford’s reference to “reinventing classic,” and a significant portion of his presentation on October 20, emphasized changes to the educational program that began in

2013 when Overseers approved a new Strategic Vision. That vision recognizes that traditional competencies are no longer enough to prepare students to thrive in a complex and changing world. The new global economy requires collaboration across networks and cultures, creativity and adaptability, critical thinking and problem solving.

“Since 2013, we have used donor gifts, dollars from our robust Annual Fund, and investment income from our endowment to create change now. Change and innovation our students could benefit from now,” Ford said.

The innovations in curriculum called for by the Strategic Vision were incubated in two programs for teachers: the VITAL summer grant program that pays teachers to collaborate to develop new approaches and methods, and the Teaching & Learning Center, a hub for on-campus professional development.

Recognizing the centrality of teaching at Penn Charter, Ford said a key campaign initiative is to raise more than $5 million to “pay, retain and inspire the best teachers.”

need-based, mission-inspired financial aid to attract the region’s most talented students. The campaign seeks to raise more than $13 million in endowment for financial aid to continue Penn Charter’s unique culture of inclusivity and service.

“All of this is important, and important to me,” Ford said of the vision for PC’s future, “but equally important to me and to us as a leader in independent schools, as a Quaker school, is the reality that teachers and our newly established Center for Public Purpose are educating student to live lives to make a difference.

“That was the overarching goal of the Strategic Vision: to prepare our graduates to thrive in the 21st century global economy, and, as the title said, to ‘Educate Students to Live Lives that Make a Difference.’ For William Penn, public purpose was indeed this school. Today public purpose starts with the school and extends to the world.”

When the 2013 Strategic Vision called for the construction of a new lower school, much speculation ensued at PC about where to place the building. However, once architects studied the possibilities, it became clear to them and to school leaders that the best site was the patch of land occupied by Dooney Field House. Placing the lower school there will unite PC’s three divisions and create a vibrant “academic village.”

Constructing a new lower school on the site of Dooney Field House creates the opportunity to build an Athletics and Wellness Center located on the other side of campus, adjacent to the track, Maguire Field, the front fields and the Strawbridge Campus.

And the decision to create a new, car-free academic village, with parking and circulation pushed to the periphery of campus, inspired a vision for a new landscape with spaces for outdoor learning, observation and exploration.

According to the new master plan, the first piece of the campus transformation is construction of a new baseball field across School House Lane on the 2.7-acre property PC acquired last year with the goal of expanding the Strawbridge Campus. 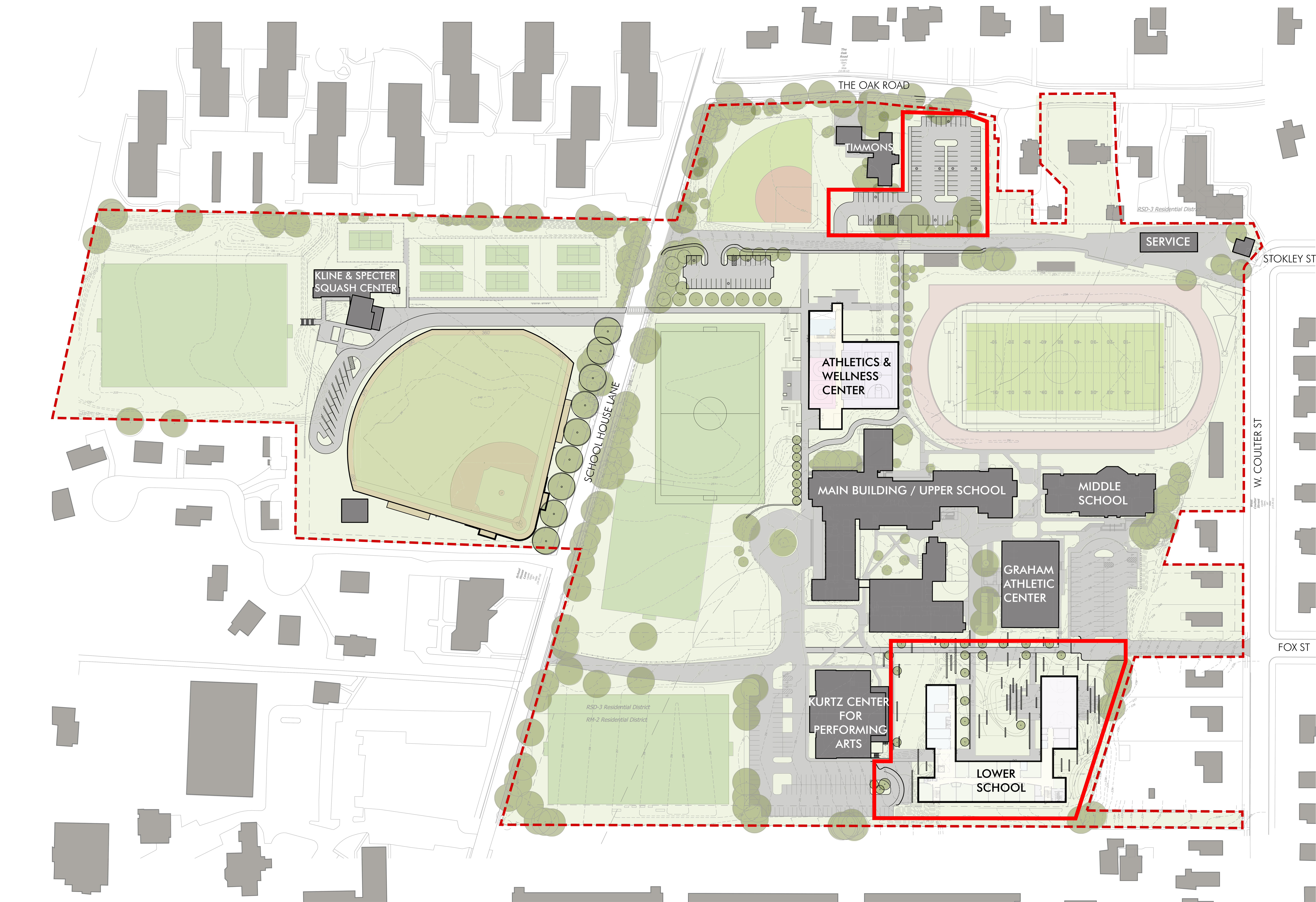 Penn Charter needs facilities to support interdisciplinary curricula, project-based learning, and future innovation. The How Far? campaign seeks to raise more than $18 million to build a lower school designed for the way we teach and children learn. This landmark building will be bigger, brighter, with:

To promote fitness for life and fortify the PC athletics legacy, the campaign seeks to raise more than $16 million to build a state-of-the art center (shown below) with: 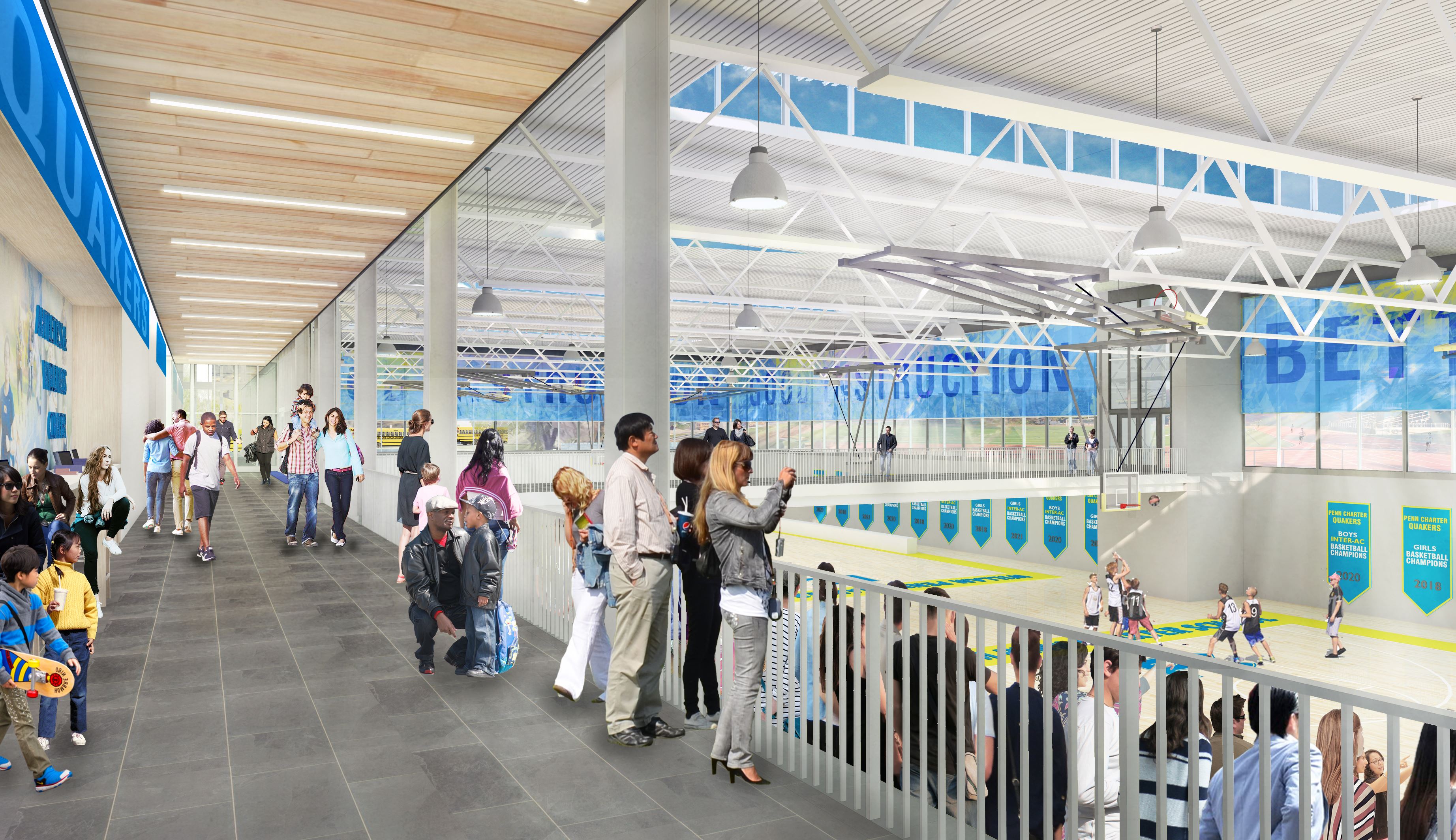 To evolve our 47-acre campus in one of the nation’s largest cities, we seek to raise more than $6 million for a campus master plan that will include: 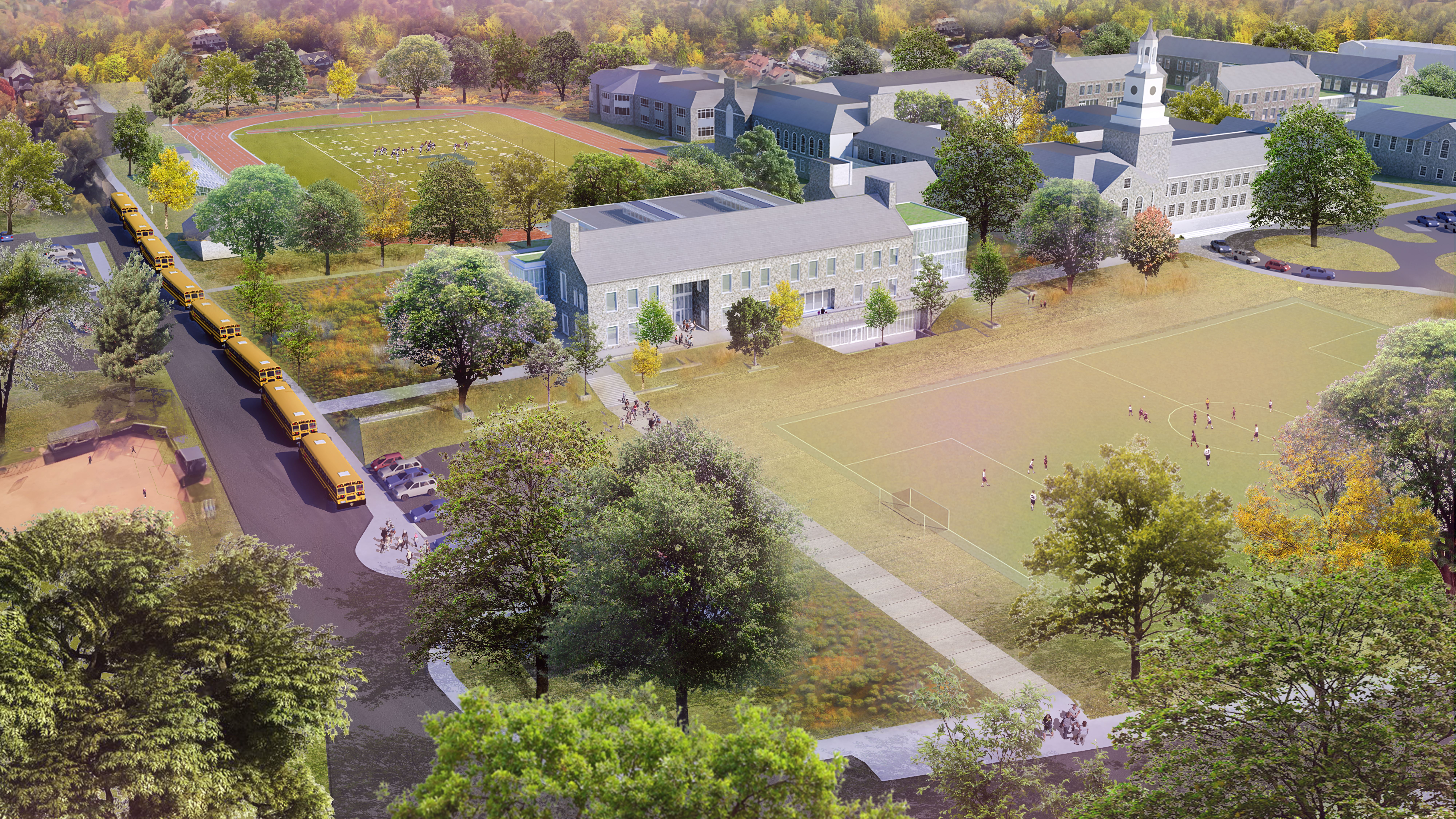 Ensuring Our Next Decade

The Annual Fund is a key initiative of the How Far? comprehensive capital campaign, and we seek to raise more than $17 million in annual giving over the course of the campaign to secure Penn Charter for the next decade.

Head of School Darryl J. Ford told the audience at the campaign kickoff that, 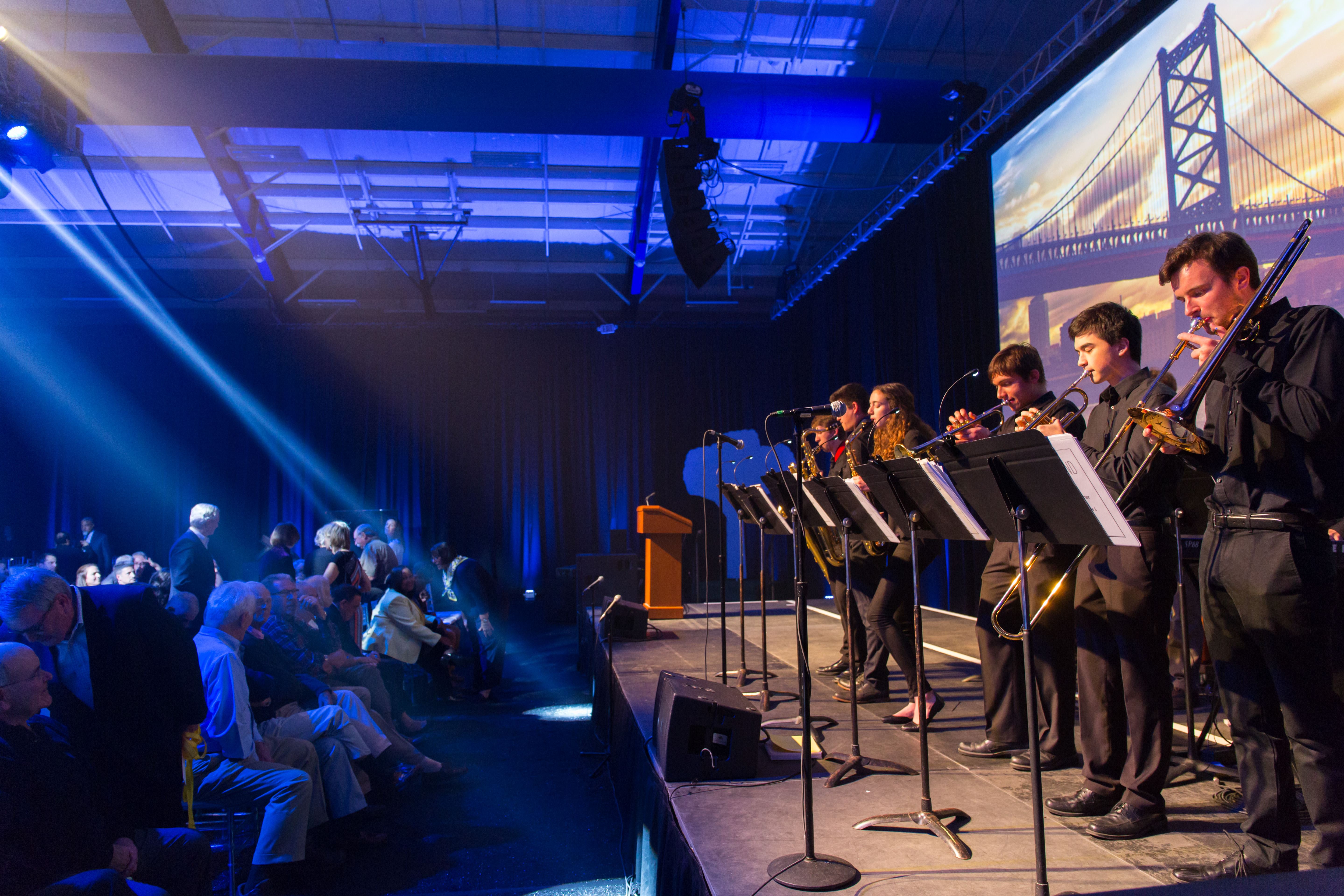 because the Annual Fund is part of the campaign, “if you’ve made an Annual Fund gift, you are already part of this campaign. Thank you!”

Securing the vision for PC will require talent, time and substantial philanthropic support. The how far? campaign seeks to raise $75 million to fund these initiatives:

Back to Stories
RSS Feeds
Be Who You Are
Planned Giving: A Win-Win-Win Gift Annuity
Academics + Athletics
Stepping into the Parent Circle
Breaking Ground: Graham Athletics and Wellness Center